A few weeks ago, I was attempting to get hold of @crocus twitter handle, for the company I work for.

It was seemingly unused (was a “private” profile, few tweets)

She replied, saying it was her profile, and we couldn’t have it.
I politely asked if she would mind perhaps using a different name, since we would really appreciate the name for our business.

I even offered her a job, managing our social networking activity.

Eventually, she emailed me:

So- she’d gotten the name, with the intention of selling it.

Now, I thought, that was a breach of “the rules” laid out by Twitter:

Attempts to sell, buy, or solicit other forms of payment in exchange for usernames are also violations and may result in permanent account suspension.

So, I emailed their support department, asking for help.

This is their response: 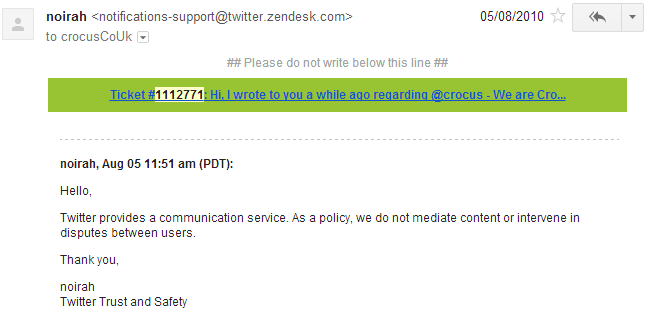 So, even with a clear breach of their rules, twitter won’t get involved!