Last week, I started having trouble with my Dell E6400 Notebook.

There is an intermittent “flashing” on the screen – kind of a “solarising” of the colours, and flickering – it also displayed as “split screen” – split horizontally, displaying the same image top and bottom, but at very low resolution.


Sometimes, the screen would turn off, flash black, and then display “Display driver stopped responding and has recovered” – see image below:

I can reproduce the problem by holding the laptop by the left hand side, towards the top of the base, and sort of pressing the base cover. 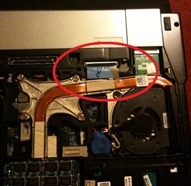 Removing the base cover, I traced the problem to be with or around the LED cable (highlighted red in the image to the left)

If i pressed the cable or where it was connecting to the main board, the flickering problem could be reproduced.

I removed the cable, cleaned it, removed all dust from around it and replaced.

This problem is not totally fixed – but it happens far less now than it did before.

I suspect very strongly, I will require a new cable.

I generally (through bad habit) tend to pick the laptop up on that side of the base – so I think the cable may of worn out.

Fingers crossed a new cable is all that is required, not a whole new motherboard!

For reference, the cable I have is pictured below: